From high unemployment to large bonuses for Wall Street bankers, recent events have left voters angry and extremely pessimistic about the direction of the country and their state.  This discontent has created a mood that is decidedly anti-Congress and anti-incumbent.  California’s 44th Congressional district, which encompasses parts of Riverside and Orange counties, is no exception, as long-time Congressman Ken Calvert is vulnerable and faces a serious challenge from Democrat Bill Hedrick. Specifically, more voters currently say they would vote for someone else than re-elect Calvert to Congress. Furthermore, after learning more information about both candidates, they move away from Calvert and toward Bill Hedrick in large numbers. 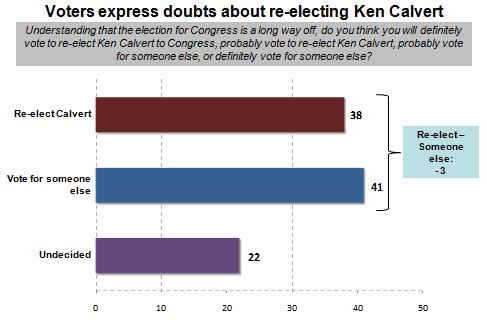 Calvert is in Trouble

In a district that Ken Calvert has represented for 17 years, a plurality of voters already wants to see someone else represent them in Congress.  In a sign of the difficulty for incumbents and Calvert in particular, less than two in five voters (38%) expresses a desire to re-elect Calvert, with a meager 14% indicating that they will definitely re-elect Calvert.  Conversely, more than two out of five voters (41%) indicated they will vote for someone else, with more than half of those voters definitely supporting another candidate (22%).  With one out of five voters (22%) saying it depends on the candidate, that leaves nearly two-thirds of voters (62%) not supporting the incumbent.

Major Shift in Support Away from Calvert and Toward Hedrick

In the horserace question, less than half of voters (49%) indicate support for Calvert, while 35% favor Democrat Bill Hedrick and 16% are undecided.  Traditionally, support below 50% signals trouble for an incumbent, as is the case for Calvert. The relatively large number of undecided voters also leaves an opening for Hedrick.

With Bill Hedrick within striking distance, the 2010 Congressional race in the 44th District is gearing up to be very competitive.  After voters hear more information—positive and negative—about both candidates, they move away from Calvert and toward Hedrick in significant numbers.  Democrat Hedrick leads in the final vote by a 3-point margin (41% Hedrick – 38% Calvert – 21% undecided).  The net 17-point shift from the initial to final vote is indicative of voter dislike of incumbent Calvert and the potential for Bill Hedrick.

While the poll gave both positive and negative information about both candidates, the survey found that voters move away from Calvert because they are greatly disturbed by his record on corruption.  Specifically:

Voters are fed up with politics as usual, and Calvert faces an extremely challenging climate given his record of corruption and voter frustration with the status quo, which opens the door for Democrat Bill Hedrick.