To: Garamendi for Congress campaign
From: Ben Tulchin and Julie Lein, Tulchin Research

With less than a month left in the race to succeed Ellen Tauscher in California’s 10th Congressional district, Lieutenant Governor John Garamendi maintains a strong lead against a crowded field of challengers. According to a recent survey among Democrats and decline-to-state voters likely to cast a ballot in the September 1st special election to replace Tauscher, Garamendi holds a double-digit lead over his competitors, he draws support throughout the district and is the first choice of voters in every county and legislative district in the area, he is the best known and the most popular candidate in the race, and he even increases his lead when voters hear more information about the candidates. Based on these findings, it is plainly evident that as the candidates head into the final weeks before election day, John Garamendi is well positioned to win this race and represent this district in Congress.

This recent survey among likely voters found that Garamendi garners support from a third of the electorate at 31%, with State Senator Mark DeSaulnier trailing at 21%, State Assemblywoman Joan Buchanan following at 17%, 9% for Anthony Woods, 5% for Republican David Harmer, and 1% for Adriel Hampton. Most voters have selected a candidate in the race as less than one in five likely voters (17%) are presently undecided, which will make it nearly impossible for any of the other candidates to cut into Garamendi’s large lead. 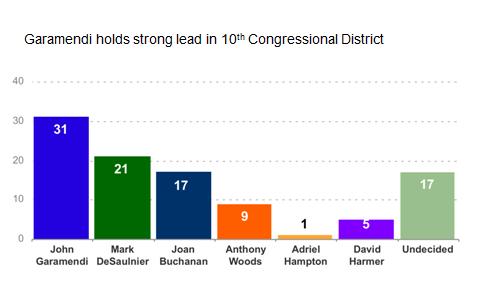 Garamendi’s strong lead is consistent across all major demographic groups as he polls ahead in every county, among both men and women, and Democrats as well as decline-to-state voters. Further, the Lieutenant Governor is the favorite candidate in the 7th state senate districtrepresented by Mark DeSaulnieras well as the 15th state assembly districtJoan Buchanan’s home base.

Not only does Garamendi hold a double-digit lead at the moment, but he has the potential to increase his lead. When we presented more information about all the major candidates, the Lieutenant Governor extends his lead even further and collects 36% of the vote, 14 points greater than DeSaulnier and 16 points ahead of Buchanan.

Given the current standing of the race with such solid support for Garamendi and fractured support for the other candidates, Lieutenant Governor Garamendi is by far the best positioned candidate to win this election.

From August 2 to August 4, 2009, Tulchin Research conducted a telephone survey among 400 Democrats and decline-to-state voters in California’s 10th Congressional district who are likely to vote in the September 1st special election to replace former Congresswoman Ellen Tauscher. The margin of error is +/- 4.9 percentage points.